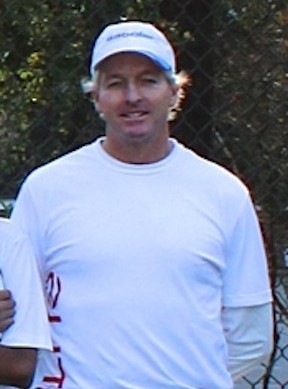 Golden Eagle Tennis Director and Head Tennis Professional Coach Allen Long is a thirty-year veteran of the tennis industry. His career off and on the court has had a significant impact on the Tallahassee tennis community as well as other North Florida and South Georgia communities.

Tutored by John Leighton, legendary coach at Wake Forest University and College Hall of Famer as well as Dennis Vandermeer, Hall of Famer and known as the “tennis pro’s coach” worldwide.

Off the court, Allen has been an innovative leader, as Tallahassee’s first City Director he co-founded professional tennis and is one of the few pro’s in the country to serve as Tournament Director for the Masters Series, Futures Series and Challenger Series for the USTA. He also is the founder of the popular City High School Tennis Championships driven by the need to improve high school tennis. His contribution culminated with Tallahassee being named a top fifty tennis city by World Tennis Magazine. He has given back to the community by volunteering to be Tournament Director for the American Cancer Society, Boys & Girls Clubs, and the Annual Boys Town Tennis Tournaments.

On the court he is an innovator and always looking to improve the skills of his students technically, tactically and strategically. His students (adults and juniors) have won national titles (three USTA adult league titles, four junior titles) and numerous regional and sectional titles.

He is also credited with coaching players to state championships in Florida and Georgia in singles and doubles. He served as a professional coach on the WTA Tour and for three before devoting his energy to improving tennis in the North Florida and South Georgia area. All of his work culminated with him receiving the USTA, PTR National Award in 2000 for the growth of tennis in the Big Bend area. He has served on the USTA Clinicians Board, the Tallahassee Tennis Association Board, the search committee for Florida State Tennis Coaches and is a Tallahassee Leadership graduate.

A multiple winner as Tallahassee’s Coach of the Year, he is committed to always serving as a positive role model on and off the court.